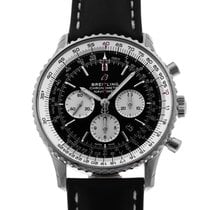 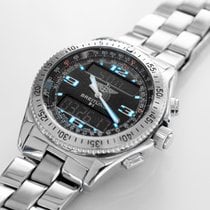 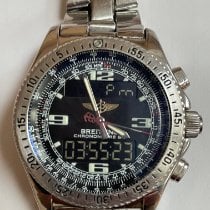 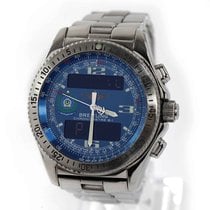 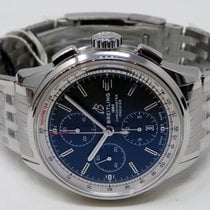 Breitling B-1: A Tool Watch for Pilots

The Breitling B-1 Chronograph can do it all. From a dual time display and timer to a slide rule, this quartz timepiece has everything a pilot could need, making it the perfect choice for recreational and professional aviators alike.

A chronograph accurate to within 1/100th of a second, a perpetual calendar, and an alarm – those are just three of the Breitling B-1's many practical features. This pilot's watch belonged to the Breitling Professional collection from 1998 to 2006. Its design is defined by analog and digital time displays; large Arabic numerals at 3, 6, and 9 o'clock; a 43-mm stainless steel case; and a case back that resembles an airplane turbine.

Thanks to its battery-powered quartz caliber, the Breitling B-1 is much more precise than any of its mechanical counterparts. More recent models with the reference numbers A68362 and A78362 are even chronometer-certified. To qualify as a chronometer, a quartz caliber's daily deviation from the reference time may not exceed 0.07 seconds at a temperature of 73.4°F (23°C); at 46.4°F (8°C) and 100.4°F (38°C), the deviation may not exceed 0.2 seconds. Breitling lists the battery life as three years, and a so-called "end of life" indicator lets you know when it's time to change the battery. Both the caliber 68 and caliber 78 are based on ETA movements.

6 Reasons to Buy a Breitling B-1

Prices at a Glance: Breitling B-1

How Much Does a Breitling B-1 Cost?

Prices for a Breitling B-1 begin around 1,800 USD. Since Breitling ceased production of this model in 2006, it is almost exclusively available as a used watch. If you're lucky, you may find a mint-condition timepiece. However, it will set you back some 3,600 USD.

Between 1998 and 2006, Breitling released three B-1 references: A68062, A68362, and A78362. The A78362 is the most recent model and features the thermo-compensated SuperQuartz caliber B78. This movement is based on the ETA E20.341 and is ten times more accurate than conventional quartz calibers. It is also chronometer-certified, which is why the dial bears the inscription "Chronometre B-1." You can purchase a ref. A78362 for roughly 2,300 USD.

The ref. A68362 is slightly more affordable at around 2,200 USD. Unlike the A78362, this watch gets its power from the caliber B68, a modified ETA E20.331. It also comes with a chronometer certificate, as indicated by the "3" in the reference number's fourth position. The version without a chronometer movement bears the reference number A68062. At 1,900 USD pre-owned, it is the most affordable B-1 edition. You can choose from a black, gray, or blue dial, and prices can vary a few hundred dollars based on the condition.

Collectors should keep an eye out for limited editions dedicated to different aircraft and aerobatics teams. One example is the B-1 Vulcan Limited Edition, which was created in celebration of the 50th anniversary of the Avro Vulcan's first flight. The Avro Vulcan was a British bomber with delta wings. It took its maiden voyage on August 30, 1952. If you would like to call this watch your own, you will need around 3,000 USD and a bit of luck on your side, as Breitling only ever made 50 copies of this model.

The Airwolf replaced the B-1 in late 2006. While they share the same technology, the two watches have very different designs. For example, the Airwolf features a sunburst dial and a bezel with a compass rose for easier navigation. Furthermore, it only has two large Arabic numerals at 3 and 9 o'clock. Inside the case, you'll find the same caliber B78 that powers the B-1. The Airwolf's dial is available in black, blue, gray, or silver. Breitling has since discontinued this model, so the pre-owned market is your best bet. Prices begin around 2,400 USD but can go as high as 3,600 USD for a very well-maintained timepiece. The Airwolf Raven with a black bezel occupies a similar price range.

Watch prices can vary significantly depending on the watch's condition, as well as on whether or not it comes with its original box and papers. Well-worn pieces without their papers are often much more affordable than like-new watches that come with a full set.