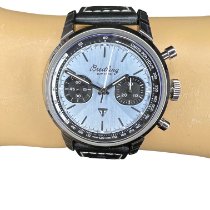 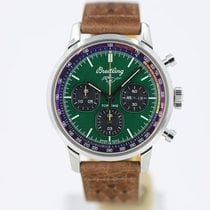 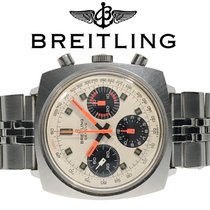 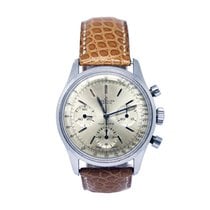 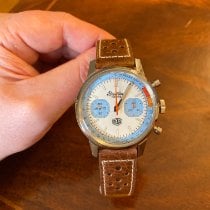 Breitling introduced the Top Time in the 1960s as a more affordable entry point into their brand. Since then, these vintage chronographs have become collector's items thanks to their classic designs and panda dials.

Vintage Navitimer, Chronomat, and Top Time watches are some of the most highly coveted pieces by collectors of Breitling watches.The Swiss watch manufacturer first added the Top Time, a chronograph, to their catalog in 1964, where it remained until the mid-1970s. This timepiece served as a more affordable alternative to the company's other models and was targeted at young, active men in their mid to late twenties. That being said, its elegant designs and moderate size (from 36 to 42 mm) make them appealing to women as well.

Early on, Breitling exclusively offered the Top Time with two subdials. In the late 1960s, Breitling added models with three subdials to the family. Models with a panda or reverse panda dial remain especially popular to this day. Panda dials have dark subdials and a light dial, while reverse pandas feature light subdials and a dark dial. Collectors are equally fond of watches with a "racing" design or a so-called "Zorro" dial. Racing watches resemble the displays on a race car's dashboard. The "Zorro" has light subdials sitting atop black triangular bands that resemble the famous masked hero's disguise. Each Top Time has a scale around the edge of its dial. You can choose from models with a tachymeter, pulsometer, or a decimal scale. Finally, acrylic crystal protects the displays.

Breitling produced the Top Time in stainless steel, yellow gold, or gold-plated stainless steel. Depending on the production year, the case will be either round or cushion-shaped. In terms of power, the manufacturer equipped these timepieces exclusively with manual calibers from Venus or Valjoux.

In 2020, Breitling launched the first new Top Time model in over 40 years. Limited to a run of 2,000 pieces, this 41-mm stainless steel timepieces features a Zorro dial and a chronometer-certified caliber B23. This automatic movement is based on ETA technology.

How much does a Breitling Top Time cost?

Prices for a Top Time range from roughly 1,600 USD for a cushion-shaped ref. 2008 to around 8,600 USD for the rare ref. 7656. However, most models cost between 2,400 and 5,000 USD. Deciding factors include the watch's case material, dial, and condition. For example, those with panda, racing, or Zorro dials are more expensive than timepieces with monotone dials.

Prices for the Top Time With Two Subdials

The ref. 2002 is the most popular early Top Time model. This is largely thanks to its appearance in the 1965 James Bond film "Thunderball." In fact, it was the first Bond watch ever to be upgraded with special functions by quartermaster Q. More specifically, Bond's Top Time comes with a Geiger counter that he uses to detect stolen nuclear weapons. The original timepiece from the movie sold for over 100,000 GBP (approx. 160,000 USD) at a Christie's auction in 2013.

Breitling initially outfitted the ref. 2002 with the manual Venus caliber 188. The manufacturer then switched to the Valjoux 7730 for the ref. 2002-3, later replacing it with the Valjoux 7733 in the ref. 2002-33. These watches are available with panda, reverse panda, or monotone silvery white dials. The 36-mm stainless steel case is water-resistant to 30 m (3 bar, 98 ft) thanks to its screw-down case back. Depending on the watch's condition, you can get your hands on one of these timepieces for between 2,900 and 4,200 USD.

The Top Time ref. 2003 entered the market at about the same time and sits in a similar price range. In terms of design, the refs. 2002 and 2003 are nearly identical. The main difference is that the ref. 2003 is available with a gold-plated stainless steel case. It also features a monobloc case with no water resistance, and it gets its power from the Venus caliber 188. Plan to spend around 2,700 USD on one of these timepieces.

The ref. 2004-5 with two subdials is yet another interesting option. Unlike the other models in the collection, its case is made of solid, 18-karat gold and not stainless steel. A Venus 175 or Valjoux 7730 powers each watch. You can purchase one of these golden timepieces in good condition for roughly 2,900 USD.

A New Edition With a Zorro Dial

Breitling announced the Top Time Limited Edition in fall 2020. This model bears a strong resemblance to the ref. 2002 with its Zorro dial and decimal scale around the dial's outer edge. The minute, hour, and chronograph seconds hands pop in red, while the subdials feature black hands.

Unlike the original, the Limited Edition's stainless steel case measures a more modern 41 mm in diameter. It is water-resistant to 30 m (3 bar, 98 ft) and houses the ETA-7753-based caliber B23.

Breitling has limited this watch to a run of only 2,000 pieces. You can find listings for this model on Chrono24 for around 5,300 USD.

If you prefer watches with three subdials, you should take a look at the Top Time ref. 810. The Venus caliber 178 ticks away inside its 38-mm stainless steel case. The hour counter sits at 6 o'clock, the minute counter at 3, and the small seconds dial at 9. Breitling modified the movement with an extra-long mainspring, improving its power reserve from 45 to 52 hours. As a result, it quickly earned the nickname "Long Playing."

Breitling still used monobloc cases for models built between 1964 and 1966. The Swiss watch manufacturer first made the transition to cases with attached case backs in 1967. Regardless of the construction method, expect to pay about 4,900 USD for a Top Time 810 with a panda or reverse panda dial. Versions with a monotone silvery-white dial sell for around 6,500 USD.

The Top Time 7656 With a Rotating Bezel

The Top Time ref. 7656 has a special place in the hearts of collectors. This model is from the 1970s and features a bidirectional rotatable bezel, which sets it apart from the rest of the collection. What's more, it measures 42 mm in diameter—a massive size for its time. Its power comes from the Valjoux 7736. Breitling only offered this chronograph with a reverse panda dial featuring three white subdials on a black background. Since it is so rare, it's not uncommon to find pieces selling for around 8,600 USD.

The Top Time with a Cushion-Shaped Case

It's also hard to miss the bright orange chronograph seconds hand. You can find this model in good condition for around 3,500 USD on Chrono24.

Models with the reference numbers 2006, 2007, 2008, and 2009 are somewhat less expensive. You can tell these watches apart by their fine details, such as ornamentation on the case and the shape and arrangement of the hour indices. Unlike the ref. 814, these models predominately have two subdials thanks to their use of the Valjoux 7730. Their chronograph pushers are also different and rectangular in shape. Prices for these timepieces sit between 1,600 and 3,100 USD.

Breitling made some modifications to the dial for the ref. 2211. Its subdials at 3 and 9 o'clock are oval-shaped instead of circular. What's more, the stopwatch, hour, and minute hands are all bright orange. Inside you will find the Venus 188 or Valjoux 7730, depending on the piece's year of production. You'll need to invest almost 2,500 USD to buy one of these pieces.

If you decide on the Top Time Racing, that price will increase by almost 600 USD. The Racing model is the same as the standard ref. 2211 except for its dial design. The net-like pattern in the middle of the dial and the white edging around the black subdials resemble the dashboard of a racecar—hence the name.