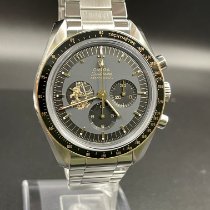 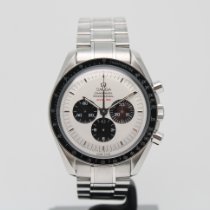 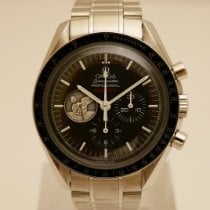 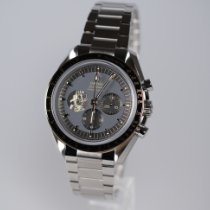 The Swiss watch manufacturer Omega pays tribute to the 1969 Moon landing with their Speedmaster Apollo 11 series. These special edition Moonwatches are extremely limited in number and coveted among collectors, making them a sound investment.

4 Reasons to Buy a Speedmaster Apollo 11

The first Moon landing celebrated its 50th anniversary in 2019. Back in 1969, the Omega Speedmaster Professional joined the astronauts on their journey to our celestial companion as part of NASA's official equipment. In honor of this major anniversary, the Swiss watch manufacturer released two special edition Speedmasters that pay homage to the Apollo 11 mission: one in stainless steel, the other in "Moonshine" gold. The gold model is nearly identical to the original Speedmaster Apollo 11 that released in 1969 in celebration of the successful space mission.

Since then, Omega has regularly introduced new versions of the Speedmaster Professional Moonwatch. Each has the same case design: a 42-mm diameter, a slightly sunken crown and push-pieces, a bezel with a tachymeter scale, and a dial with three subdials in a tri-compax layout.

One of the main ways to tell the models apart is through their material. While some Apollo 11 models are made of stainless steel, Omega also offers yellow gold, white gold, titanium, and platinum versions. What's more, the various editions have different engravings and ornamentation that pay tribute to the first Moon landing.

How much does the Speedmaster Apollo 11 cost?

The First Model: The 1969 Commemorative Edition

The first Speedmaster Professional to have "Apollo 11" in its name was the Commemorative Edition with the reference number BA145.022-69. Omega introduced this timepiece in 1969 to celebrate the successful Moon landing. It was limited to a run of 1,014 pieces, 28 of which were given to the astronauts of the Apollo program.

The case, bracelet, and dial are all made of 18-karat yellow gold, while a deep burgundy red tachymeter bezel offers a stunning contrast. Black hands and indices stand out beautifully against a golden background. Finally, the front display is protected by domed plexiglass.

Like the original Moonwatch, the caliber 861 serves as this watch's beating heart. This manual movement is based on the Lemania 1873 and has a minute counter at 3, an hour counter at 6, and a small seconds dial at 9 o'clock.

For the 10th Anniversary: Yellow and White Gold

Omega marked the Moon landing's 10th anniversary by releasing the Apollo 11 BA345.0802 and BC345.0802 in 1979. The only difference between these two models is their material: The BA is a yellow gold watch and was limited to a run of 300 pieces. On the other hand, there were only 20 of the white gold BC made. Both feature a black tachymeter bezel and a sapphire glass case back that offers a view of the refined caliber 861L (the "L" stands for luxury).

Searching for the white gold version has become a hopeless endeavor. However, the yellow gold edition is a different story. You can find models in good condition for between 30,000 and 34,000 USD.

The Speedmaster Apollo 11 created for the 20th anniversary of our first trip to our celestial partner bears the reference number ST145.022. Omega made a total of 6,250 copies of this stainless steel watch with a black bezel. Its black dial has contrasting white hands that glow in the dark.

You can recognize these timepieces by the "Apollo XI 1969" engraving on the left side of the case. Watches made for the American and German markets are also engraved with their production number. Like its predecessor, this timepiece gets its power from the caliber 861.

Plan to spend around 6,800 USD for this Apollo 11 in good condition.

The Apollo 11 with a Skeletonized Dial and Platinum Case

The Moon landing celebrated its 25th anniversary in 1994. Omega marked the special occasion by introducing three new Apollo 11 models: one in stainless steel, one in white gold, and one in platinum. The stainless steel watch had a run of 2,500 copies and is almost identical to the Apollo 11 20th Anniversary in terms of design and technology. However, the engraving on the side of its case reads "Apollo XI 1969 – 1994," and the words "Limited Edition" are engraved on its case back. Today, this watch demands around 5,200 USD.

Unlike the stainless steel model, the white gold reference 3692.30 has a white silver-plated dial and a sapphire glass case back that allows you to watch the caliber 864 at work. Omega only crafted 500 copies of this timepiece, making it rather rare. Prices of 14,500 USD or more are the norm today.

The platinum edition of the Apollo 11 25th Anniversary has the reference number 3097.30. Only 50 such pieces were ever made. Its dial and movement have both been skeletonized by hand, making this timepiece unique within the Apollo 11 series. Nowadays, these watches rarely pop up on the market, but it's safe to assume that they cost significantly more than their sister models.

Omega presented yet another Speedmaster Professional in honor of the Apollo 11 mission's 30th anniversary. Like its successor from 1994, the stainless steel reference 3560.50 features a black dial and bezel and luminous white hands and indices. The caliber 1861 ticks away inside this timepiece.

These watches are easy to spot thanks to the engraving on their case backs. It features the words: "Hello, Houston, Tranquility Base here. The Eagle has landed."

The 35th Anniversary: A Panda Dial and a Stamped Case Back

The design of the Apollo 11 35th Anniversary, ref. 3569.31, stands out from that of its predecessors. This edition has a panda dial, meaning a white dial with black subdials. The date of the Moon landing is stamped in red below the Speedmaster Professional inscription, adding a splash of color. The hands and indices are rhodium-plated and covered in luminous material. All of this is surrounded by a black tachymeter bezel.

The case back is also entirely different from that of the other Apollo 11 models. Omega chose sapphire glass that they then stamped with the Apollo 11 mission insignia on the inside.

With Mission Insignia on the Dial and Case Back

The Speedmaster Apollo 11 40th Anniversary debuted in 2009. It's available in stainless steel or platinum. Both use the caliber 1861 and have a matte black dial with luminous white hands and indices, as well as a black bezel with a tachymeter scale. However, it's still easy to tell the two models apart. The stainless steel version, ref. 311.30.42.30.01.002, features a silver relief of Apollo 11's insignia on its small seconds dial at 9 o'clock. The engraving on the case back has the same motif. On the other hand, the platinum model has a gold relief and gold case back.

Omega made 7,969 copies of the stainless steel Apollo 11 40th Anniversary. These timepieces sell for around 6,500 USD pre-owned. The platinum version was limited to a run of 69 pieces and is, therefore, extremely rare. Be sure to have some 61,000 USD on hand to purchase one of these timepieces.

A PVD Dial, Rose Gold Hands, and a Titanium Case

For the 2014 Speedmaster Apollo 11, Omega decided on a titanium case, a rose gold bezel with a black ceramic inlay, and a dial covered in a black PVD coating. Sapphire glass protects the front display. The minute and hour markers, logo, numerals, and subdial scales are all slightly raised, lending the dial a lovely 3D effect.

The hour indices and hands are made of the same Sedna gold – Omega's name for rose gold – as the bezel, offering a beautiful contrast to the black dial. A dark gray NATO strap keeps this watch, the ref. 311.62.42.30.06.001, securely on the wrist.

This extraordinary Speedmaster was limited to 1,969 copies and costs around 11,500 USD today.

Moonshine Gold and Stainless Steel for the 50th Anniversary

Omega celebrated the Moon landing's 50th anniversary by releasing two Apollo 11 models. The first is the Speedmaster Apollo 11 50th Anniversary Moonshine with the reference number 310.60.42.50.99.001. This timepiece is the spitting image of the original Apollo 11 watch from 1969. Like its predecessor, the 50th Anniversary model is made of 18-karat gold. In fact, it's made of a type of gold developed specifically for this timepiece: so-called "Moonshine" gold, which is slightly lighter than the yellow gold used for the original.

The bezel features a burgundy red inlay with a Sedna gold tachymeter scale. This watch also shares its contrasting black hands and indices with the timepiece from the 1960s. Sapphire glass guards both the front and back, offering a great view of the Co-Axial Master Chronometer caliber 3861.

The second watch is the Apollo 11 50th Anniversary Limited Edition in stainless steel (ref. 310.20.42.50.01.001). Its dial is black with hands and indices made of 18-karat gold. The bezel is also gold and has a polished black ceramic inlay.

The small seconds dial at 9 features a golden engraving of Buzz Aldrin descending from the Eagle lander. On the case back, you'll find an engraving of Neil Armstrong's footprint and famous quote: "That's one small step for a man, one giant leap for mankind."

The Co-Axial Master Chronometer caliber 3861 also powers this timepiece. This watch is limited to 6,969 pieces and sells for 9,650 USD.