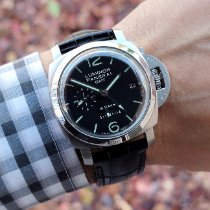 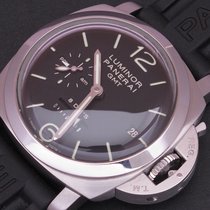 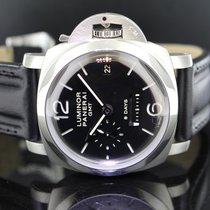 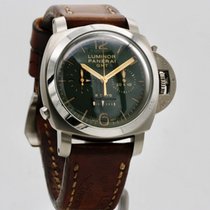 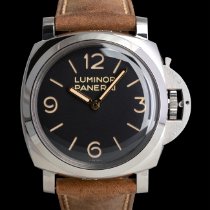 The Luminor 1950 pays tribute to the military watches Panerai produced for the Italian Navy in the 1950s. Top models feature sophisticated complications like a flyback chronograph, GMT function, or tourbillon.

A Modern Take on Iconic Watches

Panerai set the standard for modern military watches with the release of the Luminor in the early 1950s. Like the watches in the Radiomir collection, these timepieces are some of the most innovative creations to come from this Italian manufacturer.

One of the easiest ways to tell the Radiomir apart from the Luminor is the presence of a prominent crown-protecting bridge on the latter. This unique feature pushes the crown firmly into the case, preventing any water from getting inside and damaging the delicate mechanics. Standard Luminor models feature this type of crown guard without any engraving. On the Luminor 1950, the guard is engraved with the letters "REG. T.M." for "registered trademark."

Within the Luminor collection itself, you can tell whether you're looking at a standard edition or 1950 model by the shape of the case sides. While the classic Luminor has straight lines running the entire length of the case, the sides of the Luminor 1950 curve as they approach the lugs. This results in a slightly more elegant timepiece. Luminor 1950 watches range from 42 to 50 mm in diameter. The ref. PAM01392 occupies the lower end of the spectrum. At 42 mm in diameter, it makes a fantastic unisex watch. For something a bit more striking, there's also the 47-mm ref. PAM00767 with a tourbillon.

Each Luminor 1950 gets its power from an in-house caliber. Some calibers boast complications like a power reserve indicator, second time zone, or flyback chronograph. The most sophisticated versions boast a tourbillon or equation of time function. The latter displays the difference between mean and true solar time.

Panerai crafts most Luminor 1950 models out of classic metals like stainless steel, gold, bronze, or titanium. However, some editions feature modern materials like ceramic or Panerai's proprietary Carbotech and Fibratech. Moreover, Panerai has been paying ever more attention to sustainability over the last few years and offers several Luminor 1950 watches in "eSteel," a steel alloy comprised of 60% recycled material.

Prices at a Glance: Panerai Luminor 1950

How much does a Panerai Luminor 1950 cost?

The most affordable path to a Luminor 1950 is the Luminor Marina 1950 3 Days. You can call this watch your own for as little as 5,900 USD. Models with a three-day power reserve and a second time zone, power reserve indicator, or flyback chronograph sell for between 6,800 and 9,200 USD. Watches with similar functionality and an eight or ten-day power reserve demand anywhere from 11,000 to 19,500 USD.

If you're interested in a top model with a tourbillion, skeletonized movement, and GMT display, be prepared to invest between 110,000 and 145,000 USD.

The ref. PAM00372 is the Luminor 1950 for watch purists. Its design is heavily influenced by watches from the 1950s. The polished stainless steel case is 47 mm in diameter and water-resistant to 100 m (10 bar, 328 ft). Two overlapping discs combine to form the dial. The upper disc is black and features cut-out hour indices, including Arabic numerals at 3, 6, 9, and 12 o'clock. SuperLuminova coats the lower disc and shines through the holes in the upper disc. This type of stacked dial is known as a "sandwich" dial.

The manual caliber P.3000 powers this two-hand watch and boasts a power reserve of 72 hours. You can call this timepiece your own for roughly 7,400 USD.

If you prefer smaller timepieces, you should consider something from the Luminor 1950 Marina line. These watches also have the iconic sandwich dial but come with a date at 3 and a small seconds at 9 o'clock. Panerai produces a wide variety of Marina models with 42 or 44-mm cases. The watches come in all of the materials the manufacturer has to offer: from steel and gold to the proprietary materials Carbotech, Goldtech, Platinumtech, and eSteel. The dial color options are equally vast, including black, white, blue, and green.

Depending on the size and dial, you can get a stainless steel Luminor 1950 Marina for between 7,400 and 8,100 USD. A timepiece with a case made of a high-tech material like Carbotech will set you back about 12,500 USD. You can find gold editions on Chrono24 starting around 21,500 USD. Models made of Platinumtech, a platinum alloy, occupy the very high end of the Marina price range at 40,000 USD.

The Luminor With a Chronograph

The Luminor collection contains a selection of chronographs. One of the most exciting examples is the ref. PAM00526, also known as the 1950 Regatta 3 Days Chrono Flyback Automatic Titanio. Introduced in 2013, this timepiece goes above and beyond your average flyback chronograph. Its 47-mm titanium case is water-resistant to 100 m (10 bar, 328 ft), and the watch boasts a regatta countdown function.

All this functionality comes from the in-house caliber P.9100/R with a three-day power reserve. You can view the movement at work through the sapphire crystal case back. This watch comes on a rubber strap and costs roughly 17,000 USD on Chrono24.

Another interesting model is the Luminor 1950 Luna Rossa Regatta ref. PAM01038. It uses the same technology as its sister model, the PAM00526, but houses it in a black Carbotech case. Its dial is equally extraordinary. Panerai uses dark gray canvas to make the dial, lending each timepiece a truly unique look. For a sense of contrast, the hands and indices are white and red. The Luna Rossa Regatta requires an investment of about 23,500 USD.

The watches in the Luminor 1950 Yachts Challenge series are closely related to the regatta chronographs. These timepieces are 44 mm in diameter and come in stainless steel, titanium, or black ceramic. Panerai outfits these watches with the caliber P.9100. This movement has a flyback function, central chronograph minutes and seconds hands, an hour counter at 3 o'clock, and a small seconds at 9. Prices for a Luminor 1950 Yachts Challenge depend on the case material and range from 11,000 to 15,000 USD.

If you can do without a regatta timer and flyback function, you may prefer the Luminor 1950 Chrono. This affordable alternative is 44 mm in diameter and is available in stainless steel or Goldtech. Its power comes from the caliber P.9200 with a central chronograph seconds hand, a 30-minute counter at 3, and a small seconds at 9 o'clock. Fully wound, this movement has a 42-hour power reserve. Panerai offers the Luminor 1950 Chrono with a black, white, or blue dial. A stainless steel model will set you back around 8,700 USD, while a gold timepiece costs about 24,000 USD.

How much does the Panerai Luminor 1950 GMT cost?

The Luminor 1950 with a GMT function is perfect for frequent travelers. The 3 Days Automatic Acciaio ref. PAM00320 has a 44-mm polished stainless steel case and is powered by the in-house caliber P.9000 with a 72-hour power reserve. This watch features a small seconds at 9 and a date display at 3 o'clock in addition to its GMT function. Panerai produced this model from 2009 to 2016. Collectors should take particular note of this timepiece, as it may increase in value in the future. You can purchase a pre-owned piece on a leather strap for around 6,100 USD. Mint-condition models demand about 7,100 USD.

The stainless steel ref. PAM01535 measures 42 mm in diameter. You can view the in-house caliber P.9011 with a three-day power reserve through the sapphire crystal case back. The three central hands show the hours, minutes, and GMT time. A small seconds at 9 and date at 3 o'clock round off this watch's functionality. Line indices and Arabic numerals at 6 and 12 sit atop the beautiful black "Clous de Paris" dial. Panerai mounts the case on a dark brown leather strap with light stitching. You can find listings for this model on Chrono24 for roughly 8,600 USD. The 44-mm Luminor 1950 GMT is a potential alternative. It uses the same technology and changes hands for about 8,800 USD in steel and 12,000 USD in ceramic.

Those who like to have an eye on their power reserve alongside a second time zone are sure to enjoy the Luminor 1950 GMT Power Reserve series. Panerai produces this watch with a 42 or 44-mm case, and both versions use the caliber P.9012. This movement represents the next step in the evolution of the P.9011 and has a three-day power reserve. You can see how much of that reserve is left thanks to an indicator at 5 o'clock. Prices vary by the exact model and fall between 9,000 and 9,400 USD.

The Luminor collection is home to several GMT watches with eight or ten-day power reserves. One example is the Luminor GMT 8 Days PAM00233. This 44-mm timepiece features the caliber P.2002 and is easily recognizable by its bar-shaped power reserve indicator at 6 and dual small seconds and AM/PM display at 9 o'clock. This model requires an investment of about 12,000 USD. The version with an 18-karat rose gold case (PAM00576) sells for approximately 24,000 USD.

As its name implies, the Luminor GMT 10 Days can run for ten days uninterrupted when fully wound. Otherwise, this model is identical to the 8 Days. You can find listings for the stainless steel GMT 10 Days on Chrono24 for about 14,500 USD. For an additional 1,100 USD, you can get your hands on the black ceramic edition.

The Luminor 1950 With Other Complications

Panerai also produces Luminor 1950 models with complications rarely found in tool watches. For example, the Luminor 1950 GMT Equation of Time PAM00670 has an equation of time display (i.e., the difference between mean and real solar time) in addition to its date, month, and second time zone. It changes hands for roughly 20,000 USD on Chrono24.

Thanks to the caliber P.4100, the Luminor 1950 Perpetual Calendar boasts a perpetual calendar and an additional time zone. The date and day appear in displays at 3 o'clock. If you flip the watch over, you'll find the month, year, and leap year displays on the back of the watch. You can choose from the PAM00742 with a blue sunburst dial and a Goldtech case or the PAM00715 made of Platinumtech. The former costs around 45,500 USD, while the platinum edition demands some 68,500 USD.

The Luminor 1950 Chrono Monopulsante 8 Days GMT Blu Notte PAM01135 combines a monopusher chronograph with a GMT display and an eight-day power reserve. The manufacturer crafts its 44-mm case out of black ceramic and pairs it with a dark blue sunburst dial. Thanks to white luminous material, the numerals, hands, and indices stand out against the dark background. You can call this watch your own for about 21,000 USD.

Prices for the Tourbillon GMT Titanio

Alongside the PAM00768 and PAM01060, the ref. PAM00767 is a highlight of the Luminor 1950 series. Panerai launched their first 47-mm skeleton watches in 2018. The star of the show is the manual caliber P.2005/T with a tourbillon. This exclusive manual movement was the first Panerai tourbillon caliber made of titanium. Its bridges and plates are all intricately skeletonized, providing a view into the movement's inner workings. Finally, three barrels combine for a massive six-day power reserve.

The dial, if you can even call it that, consists of four Arabic numerals at 3, 6, 9, and 12 o'clock and line indices. There are two central hands for the hour and minutes, as well as a small seconds dial and a GMT display. A power reserve indicator and AM/PM indicator round off this watch's functionality.