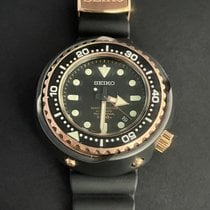 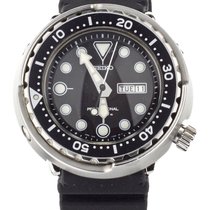 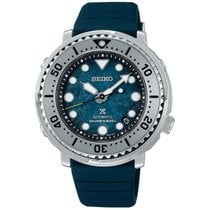 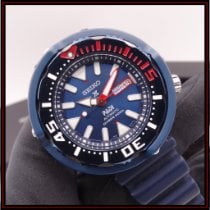 5 Reasons to Buy a Seiko Tuna

An Impressive Tool Watch for Exploring the Deep

The Seiko Tuna is a series of professional diving watches that have been in production since 1975. Of course, "Tuna" is not this timepiece's official name. Instead, this moniker comes from Seiko's fan community, who recognized the resemblance between this watch's distinctive outer case and a can of tuna. Some collectors lovingly refer to these timepieces as "hockey pucks" since most have black cases and are up to 52 mm in diameter.

Every Tuna model has a large outer case that is attached to the actual case by four screws. It reaches up past the unidirectional diving bezel and protects the bezel and case against strong impacts. The wearer can operate the bezel via openings on either side of the outer case, which expose a section of the bezel's toothed edge.

Seiko has been crafting these timepieces out of titanium since the very first model, known as the Grandfather Tuna. Only a few of the more affordable models are made of stainless steel and, in some instances, have a plastic outer case. These editions tend to have lower water resistances. While some titanium versions can survive up to 100 bar (1,000 m, 3,280 ft), the stainless steel editions are water-resistant to a maximum of 20 bar (200 m, 656 ft).

Seiko equips most models with stripped-down Grand Seiko calibers. However, there are also watches with high-quality quartz, kinetic, or Spring Drive movements.

How much does the Seiko Tuna cost?

The Grandfather Tuna and Its Grandchildren

Many collectors consider the Grandfather Tuna ref. 6159-7010 their personal holy grail. This timepiece debuted in 1975 and was sold outside of Japan under the reference numbers 6159-7009 and 6159-7019. Seiko created this watch to serve as a tool for professional divers. They were also the first manufacturer to craft a diving watch out of titanium. This light yet robust material is used for both the inner case as well as the massive outer shell, which is coated in scratch-resistant black ceramic.

The final 51-mm watch is water-resistant to 600 m (60 bar, 1,969 ft) and suitable for saturation diving. Instead of using a conventional helium escape valve, Seiko turned to their proprietary L-shaped glass seal. Unlike rubber seals, Seiko's version prevents helium molecules from entering the watch in the first place. This means the glass won't pop out during decompression as a result of helium trying to escape.

As a professional diving watch, the Grandfather Tuna has large, easy-to-read indices and hands that are coated with a generous amount of luminous material. Other features include a unidirectional diving bezel, a date display at 3, and a crown at 4 o'clock. The high-beat caliber 6159A ticks away inside this timepiece at a rate of 36,000 alternations per hour (A/h). Expect to pay around 7,100 USD for this watch.

If the Grandfather Tuna costs a bit too much for you, there are a number of good and affordable alternatives. These include the Emperor Tuna SBDX011 from 2009, as well as the Emperor Tuna Rose Gold SBDX014 and the new Emperor Tuna SBDX013 from 2015. All three share their case design with the original and are also made of titanium. However, unlike their famous predecessor, these models are water-resistant to 1,000 m (100 bar, 3,280 ft) and powered by the automatic caliber 8L35. This movement has a balance frequency of 28,800 A/h and is based on the Grand Seiko caliber 9S55. You'll find these timepieces in the Marinemaster collection. Never-worn editions sell for between 2,400 and 3,600 USD, while pre-owned pieces change hands for as little as 2,200 USD.

Prices for the Golden Tuna and Darth Tuna

Golden Tuna watches are direct descendants of the Grandfather Tuna. These models set themselves apart with their golden inner case, bezel, and crown. Their golden hue comes from a layer of titanium nitride (or TiN). The earliest Golden Tuna model premiered in 1978. It has the reference number 7549-7009 and is water-resistant to 600 m (60 bar, 1,969 ft). The quartz caliber 7549 powers this timepiece and provides it with a day-date display at 3 o'clock. You can call this watch your own for roughly 1,600 USD.

At 2,100 USD, the Golden Tuna SBDS018 from 1986 is slightly more expensive. However, the price increase is justified by this timepiece's 1,000 m (100 bar, 3,280 ft) of water resistance and more modern quartz caliber 7C46. Seiko re-released this watch in 1999 under the reference number SSBS018. Both models are nearly identical but for a few minor differences on the dial and the text on the case back.

Known as Darth Tuna, the ref. SBBN011 also gets its power from the caliber 7C46 and can survive depths of up to 1,000 m (100 bar, 3,280 ft). Instead of a golden layer of TiN, Seiko coats this watch in a layer of black DLC. This solid-black color scheme reminded Seiko's fan community of Star Wars villain Darth Vader, and the moniker quickly stuck. Prices for well-maintained pieces range from 1,300 to 2,000 USD.

Buying the Tuna with a Spring Drive Caliber

In recent decades, Seiko has earned a reputation as a pioneer of new caliber technologies. One of the most notable examples of this is the Spring Drive. These movements combine the best of mechanical and electronic watchmaking. The easiest way to identify one of these movements is the extremely fluid glide of the second hand around the dial.

One of these movements, namely the 5R65 with a 72-hour power reserve, made its way into the Marinemaster collection in 2013. It appears in the SBDB008 or, as fans call it, the Spring Drive Tuna. Seiko only produced 300 copies of this watch. It is water-resistant to 600 m (60 bar, 1,969 ft) and has the same golden TiN-coated inner case as the Golden Tuna. The outer shell is covered in a layer of gray DLC. Interestingly, the inner case of this watch isn't one solid piece like the other Tuna models. Instead, it has a screw-down case back. Thanks to its Spring Drive caliber, this timepiece also has a power reserve indicator on its dial at 9 o'clock.

Plan to spend around 4,400 USD on this rare collector's item. Alternatively, you may also enjoy the SBDB009 from 2014. This model has the same technology as the limited edition but is in series production and has a solid black color scheme. Prices for this model sit at about 3,800 USD.

An Affordable Alternative: The Seiko Arnie

In the early 1980s, Seiko produced several affordable alternatives to the Tuna. One such timepiece bears the reference number H558-5000. This watch is often called "Arnie" since none other than Arnold Schwarzenegger himself wore one of these timepieces in multiple movies, including Predator, Running Man, and Twins.

"Arnie" follows the same basic design principles as the Tuna but has a much smaller 45-mm case. It also has a stainless steel inner case and a plastic outer shell. The quartz caliber H558 ticks away inside this timepiece and lends it both an analog time display as well as a digital LCD one. The digital portion can also serve as an alarm, chronograph, or GMT display. The Seiko H558-5000 Arnie is beloved among collectors and requires an investment of roughly 1,100 USD.

Seiko announced an updated version of the Arnie at Baselworld 2019: the Prospex SNJ025 Solar . The quartz caliber H851 boasts the same functionality as the original Arnie but gets its power from the sun. What's more, the case has grown slightly to 48 mm in diameter. At only 550 USD new, this watch is among the most affordable members of the Tuna family.

The Origin of the Seiko Tuna

In 1968, Seiko received a letter from a professional diver. In it, he explained that the manufacturer's watches weren't suited for the extreme conditions experienced deep under water. He described how his watches broke either under high pressure or as helium tried to escape during decompression.

Seiko took the letter seriously and gathered a team to develop a proper professional diving watch. Almost seven years and 20 patents later, lead developer Ikuo Tokunaga presented the Tuna to the world. It was a tool watch in every sense of the term and was fit for saturation diving despite its lack of a helium escape valve.